TALMUDIC JEWS HAVE A BLASPHEMOUS OPERA IN ITALY 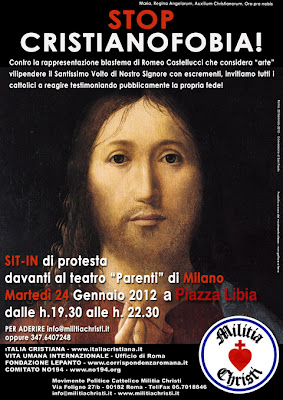 Popes and saints have opposed attacks of the Talmudic Jews on the Catholic Church. Today the evil seems unopposed. The Talmud which blasphemes Jesus and Our Lady is being translated into Italian by the Italian Ministry of education. Rabbi Ricardo Segni, the chief leftist Rabbi in Rome, is on the committee overseeing the translation.From January 24 to 28 at the theatre Parenti in Milan a blasphemous opera was held.It  had the support of the Jewish Left media. The opera Sul concetto di volto nel figlio di Dio, Romeo Castellucci does not come under hate laws created by the Jewish Left, the ADL etc. The staging of this  opera in Milan known for its blasphemous scenes when staged abroad, is part of the religion of the Talmudic Jews. The director of the Parenti theatre it is reported, is a Jew, Ruth Shammah.
Blasphemy is part of the beliefs of members of the Bnai Brit, Italy who have threatened Catholic academics and universities with criminal charges, for only affirming Catholic teaching. They object to the Catholic teaching  which says Judaism and other religions are not paths to go to Heaven and that Jews need to convert into the Catholic Church to avoid Hell; for salvation. (Dominus Iesus 20, CDF, Notification on Fr. Jacques Dupuis S.j etc). The Rabbis visited the Urbaniana Pontifical University in Rome.
The Jewish Left values and the opera in Milan represent Satan and were not criticized by the Jewish Left.
The opera in Milan against the belief in God with its accompanying blasphemy, in the arts and media, is a part of Talmudic Judaism, the religion of the Freemasons and the Jewish Left. It is the religion of those who choose to serve Satan instead of God.
Those who oppose the Talmudic Jews, the Satanists, Freemasons and the Kabbalists are threatened with anti Semite laws.It is anti Semitic to be a Catholic.
Jesus called a type of Jews, children of the devil and  ‘snakes and vipers’.He spoke about  the ‘synagogue of Satan’.
The owner of the adult film industry in the USA is a Jew and also blasphemes against Jesus it is reported on the internet.Recently there was a Catholic Jewish Left Day of Reflection in Rome. Maintaining dialogue and ‘having good relations with the Jews’ means not being victimized by the political and military threat of Israel and the Jewish Left.  In exchange, the Catholic Church has to change its teaching in ecumenism (no ecumenism of return) and Judaism and other religions (they do not have to convert and all religions are equal).Restrictions are placed on the Catholic Traditional Latin Mass which is vehemently opposed in the leftist mainstream media in Italy.
The price of ‘good relations’ is the creating of a culture with blasphemy,atheism and hate enforced with legal blackmail and extortion, against the followers of Jesus Christ, whom Satan hates.
The anti Semitism threat is being used against Catholic bishops to make them announce that those who are faithful to Jesus and His Church are not Catholics. Catholics are being asked by the Jewish Left not to use the word ‘Catholic’. Satan is a liar and his actions are covert.
Those Catholics who rebel could be ruined financially. So Catholics do not want to talk about this issue in public. They just mention the ‘liberals’ and not the Jewish Left threat to ‘liberal Catholics’ to remain liberal.
I was studying at a Pontifical University and seminary in Rome but could not  continue my studies since they have to protect themself from Jewish Left laws. The faculty was being opposed by ‘outsiders’ because of my official Catholic views. My Spiritual Director was being telephoned and finally he asked me to search for a new Spiritual Director. This priest himself would have to leave the seminary.
Pontifical universities in Rome welcome students with liberal views, freethinkers and New Agers, those opposed to Church teachings. Those who hold the Catholic teachings are threatened and expelled. This is done often with the approval of the Vatican including the former Congregation for the Doctrine of the Faith. The cardinals and bishops want to maintain 'goof relations'  with the Jewish Left and their Catholic supporters like Andrea Riccardi and the St. Egidio organization.
Prayers of Reparation were held on January 23 by the Franciscan Friars of the Immaculate Benevento and Il Camino dei Tre Sentieri. Protests were held outside the theatre by Catholic political organizations Nuova Forza, Militia Christi and others.-Lionel Andrades


Forza Nuova, Militi Christi and others  protesting againt the opera in Milan.
Posted by Catholic Mission at 5:52 PM

Talmudic Judaism is the principle enemy of the Church and progenitor of groups such as Freemasonry and Communism. There is a new Catholic book coming out soon that abundantly documents the Church's warnings against this cancerous sect. Here is the link:

The book will also present a strong case that Vatican II and the New Rite of Mass are Judaic inspired creations.