Canonist Peters thinks Fr.Guarnizo was wrong in witholding the Eucharist to the Barbara Johnson.
http://canonlawblog.wordpress.com/2012/03/15/1733/
Edward  Peters errs in assuming that the outward action does not indicate the internal thoughts or motivation. This is the moral theology of Fr.Bernard Haring and Fr.Charles Curran.
Homosexuality and lesbianism will always be a mortal sin.It is grave matter and the woman has admitted it in this case.She persists in receiving the Eucharist and still persists in the sin.
Edward Peters, JD, JCD 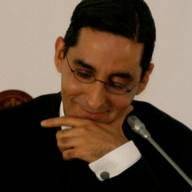 CANON LAWYER IN INDIANA NEEDS TO BE ASKED : IS BISHOP KEVIN RHOADES JURIDICALLY A CATHOLIC ?
Evidence of the Fort Wayne Bend bishops denial of the Catholic Faith is on a website.
http://eucharistandmission.blogspot.it/search/label/RealCatholicTV.com

Questions for the Canon Lawyers: Can Archbishop Allen Vigneron and Bishop Kevin Rhoades be considered Catholic if they refuse to affirm in public the dogma extra ecclesiam nulla salus ?

It's a Free Country.. : A Catholic who rejects a defined dogma like outside the church no salvation is automatically excomunicated. He has no right to use the word 'Catholic'.
http://eucharistandmission.blogspot.it/search/label/RealCatholicTV.com


POLITICS OVER THE EUCHARIST

Eucharist is not to be given to the Quaker, Lutheran, and Buddhist since they are outside the Church
http://eucharistandmission.blogspot.it/2012/03/eucharist-is-not-to-be-given-to-quaker.html

Fr. Marcel Guarnizo Defends Himself :If a Quaker, Lutheran or Buddhist, desiring communion introduced himself as such, before Mass, a priest would be obligated to withhold communion
http://eucharistandmission.blogspot.it/2012/03/fr-marcel-guarnizo-defends-himself-if.html

ITS OFFICIAL. SHE WILL BE GIVEN THE EUCHARIST IN WASHINGTON, USA
http://eucharistandmission.blogspot.it/2012/03/its-official-she-will-be-given.html
Posted by Catholic Mission at 11:08 AM

I am in agreement. Fr G acted correctly. If I was a priest I would have done the same thing.