When the LCWR invites Curran, Hubbard and Schneiders they are saying the Catholic Church is not the one true Church (UR 3) and every one does not need faith and baptism for salvation (AG 7) 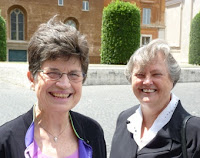 The Leadership Conference of Women Religious (LCWR) is rejecting Vatican Council II (AG 7) and the dogma extra ecclesiam nulla salus.They are saying that the Catholic Church is not the sole moral authority.


Statutes are approved of a religious organization which does not believe in exclusive salvation in the Catholic Church and the literal interpretation of the dogma ? The  LCWR is Catholic even when it says invincible ignorance and the baptism of desire are  explicit exceptions to the dogma ? Are these 'exceptions' not  always implicit for the SSPX?


I have mentioned on a blog that if you invite Charles Curran to speak you are telling us all what you believe. If you openly promote New Age you are telling us what you believe. In the case of the LCWR, they represent the Church and so they are saying that this is what the Church teaches. They are also saying that there is no exclusive salvation in only the Catholic Church. When you invite Barbara Marx Hubbard your message is clear. You are saying that the Catholic Church is not the one true Church (UR 3, Vatican Council II) and all people do not need Catholic faith and the baptism of water for salvation (AG 7).Your also saying that there can be an interpretation of Vatican Council II which negates AG 7.


If a Mother Superior of a community affiliated with the  LCWR  inquired if their community could hold the literal interpretation of the dogma extra ecclesiam nulla salus along with implicit baptism of desire and invincible ignorance etc in accord with Vatican Council II (AG 7), would the LCWR  approve?


They would be saying that all non Catholics in 2012 need to enter the Catholic Church for salvation and if there are any exceptions,' who have not had the Gospel preached to them’ it would be known only to God.


This is not the  ecclesiology of the LCWR which is  centered on Jesus and excludes the Church. So an LCWR  member can believe in Jesus, according to the Jehovah Witnesses, distribute sacred pictures of Jesus as they do in Rome, and teach according to their religion and still consider oneself in the Catholic Church. This would be Jesus without the Catholic Church which the Bible tells us is His Mystical Body.The LCWR rejects exclusive ecclesiocentrism. 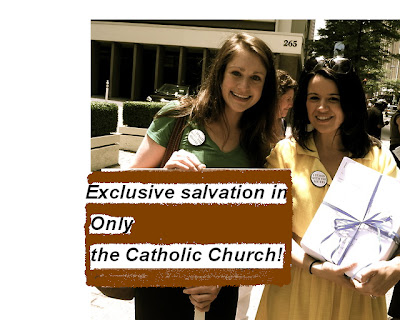 The CDF could help the sisters by announcing that those saved in invincible ignorance and the baptisms of desire are implicit for us and only explicit for God.


It is  true that only those who know about Jesus and the Church and yet do not enter are oriented to Hell (LG 14) however we cannot judge that someone is really in invincible ignorance or someone is not. This judgement is left to God.The dogma and AG 7 says all need to convert into the Church for salvation.

LCWR Sisters and the Secretary of the CDF need to affirm the literal interpretation of the dogma in accord with Vatican Council II (AG 7) along with implicit baptism of desire and invincible ignorance
http://eucharistandmission.blogspot.it/2012/06/lcwr-sisters-and-secretary-of-cdf-need.html#links

Photo adapted from the Nuns Justice Project.
Posted by Catholic Mission at 3:21 PM