MSGR.CAMILLE PERL, SECRETARY OF ECCLESIA DEI IN A LETTER TO AN AUSTRALIAN LAYMAN DID NOT MENTION THAT THE BAPTISM OF DESIRE AND INVINCIBLE IGNORANCE WERE NOT EXCEPTIONS TO THE LITERAL INTERPRETATION OF THE DOGMA EXTRA ECCLESIAM NULLA SALUS.

Mons. Perl the secretary of Ecclesia Dei, Vatican does not mention in a letter issued in 1998 (1) that there are no known exceptions to the literal interpretation of the dogma extra ecclesiam nulla salus.

The Letter suggests  that Mons. Perl was not aware of the Richard Cushing Error .So like the former Archbishop of Boston Cardinal Richard Cushing he assumes those saved in invincible ignorance and the baptisms of desire are exceptions to the dogma and the interpretation of Fr. Leonard Feeney.

Cardinal Richard Cushing assumed that we personally know these cases saved. So he cited them as exceptions to Fr. Leonard Feeney and the traditional interpretation of the dogma.

So the Ecclesia Dei Secretary assumes we can see the dead, for them to be exceptions. So he said there was salvation outside the Church.

So it means Lumen Gentium 16 (invincible ignorance) contradicts Ad Gentes 7 (all need Catholic Faith). It also means the Society of St. Pius X (SSPX) will have to affirm this irrationality.

It is not only irrational it is heresy that the Ecclesia Dei would be expecting the SSPX to endorse. Since, Mons. Perl would not be affirming the literal interpretation of the dogma and assuming there are exceptions. This is an important point which was not brought out in the Letter to Mr.Loughnan.

The visible dead who are exceptions is a new doctrine which originated in Boston.

The SSPX communiqué July 19, 2012 is saying that there is no salvation outside the church since we do not know any exceptions to the dogma on salvation.

We also do not know if anyone was saved in invincible ignorance and the baptism of desire over the last 100 years or more.

When there is no salvation outside the Church how can the Ecclesia Dei Secretary expect the SSPX to accept the theology of religions and ecclesiology of communion and other speculation? 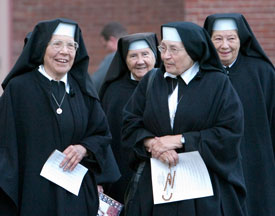 The Sisters of St. Benedict Center, Worcester, USA also traditionalists recognized by Ecclesia Dei affirm the literal interpretation of the dogma on salvation just like the SSPX. For them there are no known exceptions. They also affirm the possibility of being saved with implicit desire and invincible ignorance (along with the baptism of water).For them being saved in invincible ignorance etc are irrelevant to the dogma. Invincible ignorance etc are not an exception. So LG 16 does not contradict AG 7 and Vatican Council II does not contradict extra ecclesiam nulla salus, the Syllabus of Errors, Pascendi, Mystici Corporis etc. They have been granted canonical status and are in full communion with the Catholic Church.
-Lionel Andrades

In 1988, Mr. John Loughnan, a layman from Australia who happens to be a friend of mine,wrote the Pontifical Commission Ecclesia Dei (PCED) requesting clarification on severalcontroversies surrounding the SSPX. Mr. Loughnan also inquired as to the status within theChurch of Fr. Feeney’s followers.Concerning this last question, Msgr. Camille Perl, secretary of the PCED, replied to Mr.Loughnan as follows in N. 343/98 dated 27 October 1998: “The question of the doctrine held bythe late Father Leonard Feeney is a complex one. He died in full communion with the Churchand many of his former disciples are also now in full communion while some are not. We do not judge it opportune to enter into this question.”While not wishing to engage in this controversy, Msgr. Perl clearly confirms that Fr. Feeney diedin full communion with the Church, and that several of his spiritual descendants who hold hissame doctrinal interpretations are in full communion with the Church. Such a statement is clearlywithin the mission of the PCED as this commission was established by Pope John Paul II tooversee the reconciliation and well-being of traditionalists within the Church.On that note, the evidence is clear: while the position held by Fr. Feeney and his spiritualdescendants may be controversial, holding these positions does not, in itself, place one outside of the Catholic Church. In short, it is clear from the Church’s current pastoral and canonical practice that the Church considers this an internal controversy, and that she acknowledges thegood standing of most of those who uphold a restrictive interpretation of EENS, BOB and BOD.

Posted by Catholic Mission at 4:21 PM

Lionel, may God Bless and protect you for your strong and courageous stand as defender of the faith.

I would strongly encourage any Catholic Cleric along with any layman to firstly pray for the truth and then secondly to do their own due diligence in researching, reading, studying and absorbing the writings , positions and teachings of Cardinal Richard Cushing and Father John Courtney Murray and how they influenced Vatican II versus the centuries of Catholic teachings defended by Father Leonard Feeney and Father Frederick Faber (especially the book , The Precious Blood). Hopefully you will begin to understand how and why we entered into the Crisis in the Church, weakness and dilution of Catholic teaching and Culture of sins of the flesh. If you are of a sincere heart, mind and soul, with the grace of God the answers may become obvious to you so that you may be part of the solution.