SSPX ANNOUNCE ACCEPTANCE OF VATICAN COUNCIL II IN LINE WITH THE SYLLABUS OF ERROR, THE DOGMA ON EXCLUSIVE SALVATION AND WITHOUT THE CUSHING ERROR. THERE WILL BE WORLD WIDE CONSTERNATION ON THE LEFT 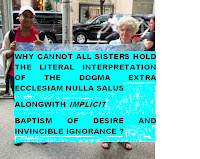 The Society of St.Pius X (SSPX) General Chapter Statement (July 19,2012) shows that they can accept Vatican Council with the hermeneutic of continuity.

It’s simple. All they have to do is get rid of the Richard Cushing error and then interpret the Council. It would mean Lumen Gentium 16 is not an exception to Ad Gentes  7 or the dogma on exclusive salvation. Imperfect communion, seeds of the Word, a good conscience do not contradict extra ecclesiam nulla salus as interpreted by the SSPX Chapter statement.

With there being no exceptions to the dogma on salvation we have AG 7 in accord with extra ecclesiam nulla salus and . Vatican Council II affirming  the thrice defined dogma. So  then the Council  has to be in agreement with the Syllabus of Errors. 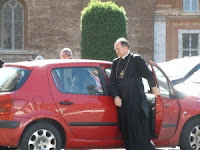 It’s time for the SSPX to play their trump card and show the world how Vatican Council II can be interpreted according to Tradition, without the irrational Cushing error and with the hermeneutic of continuity.

Here is part of the General Chapter statement with comments.

For this reason it seems opportune that we reaffirm our faith in the Roman Catholic Church, the unique Church founded by Our Lord Jesus Christ, outside of which there is no salvation nor possibility to find the means leading to salvation;

Lionel: Here the SSPX is affirming the defined dogma in accord with Vatican Council II and without the Richard Cushing of being able to see the dead alive, who are supposed to be exceptions to the dogma on salvation.

our faith in its monarchical constitution, desired by Our Lord himself, by which the supreme power of government over the universal Church belongs only to the Pope, Vicar of Christ on earth; our faith in the universal Kingship of Our Lord Jesus Christ, Creator of both the natural and the supernatural orders, to Whom every man and every society must submit. 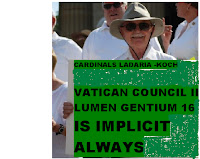 Lionel: They are affirming their allegiance to the pope and recognizing the Kingship of Christ. This is in accord with Vatican Council II which says outside the church there is no salvation (AG 7) and hence there is the obligation for all non Catholics to be a visible member of the Church. A consequence of this belief for religious liberty is that all non Catholics have the moral obligation  to enter the Church.

Lionel: The Society affirms the dogma extra ecclesiam nulla salus as it was interpreted for centuries and according to the July 19, 2012 statement. It affirms the Syllabus of Errors which is part of the constant Magisterium of the Church.

in regard to all the novelties of the Second Vatican Council which remain tainted with errors, and also in regard to the reforms issued from it.

Lionel: So it affirms the constant Magisterium and rejects the novelties that have emerged with the Richard Cushing Error.

We find our sure guide in this uninterrupted Magisterium which, by its teaching authority, transmits the revealed Deposit of Faith in perfect harmony with the truths that the entire Church has professed, always and everywhere.

Lionel: This Deposit of Faith is in accord with Vatican Council II without the Cushing  Error and in harmony with the dogma on salvation and the Syllabus.

The Society finds its guide as well in the constant Tradition of the Church, which transmits and will transmit until the end of times the teachings required to preserve the Faith and the salvation of souls,

Vatican Council II says outside the Church there is no salvation and is in agreement with the Syllabus of Errors, Mystici Corporis,Quanto Conficiamus etc.
http://eucharistandmission.blogspot.it/2012/08/sspx-can-accept-vatican-council-ii-in.html

Posted by Catholic Mission at 9:01 PM

" There are those who ask what authority, what theological qualification, the Council intended to give to its teachings, knowing that it avoided issuing solemn dogmatic definitions backed by the Church’s infallible teaching authority. The answer is known by those who remember the conciliar declaration of March 6, 1964, repeated on November 16, 1964. In view of the pastoral nature of the Council, it avoided proclaiming in an extraordinary manner any dogmas carrying the mark of infallibility.” (General Audience, December 1, 1966, published in the L’Osservatore Romano 1/21/1966) "


With all the decades of abuses and immorality coupled with all but the complete destruction of the Mass, the Holy Ghost did protect the hermeneutic of continuity within Vatican Council II to all the past centuries of true Church teaching.

We have the duty and moral responsibility to now restore the dismal failings and sacrilege of even the most righteous Pastoral intents of VCII which were not implemented in a fruitful manner. The Catholic Faith was watered down, compromised and all but lost to the modernistic destructive interpretations, practices and the dismal catechesis of not teaching sound Catholic doctrine. As noted by subject title, SSPX's Holy stance should be the acceptance of Vatican II in line with the Syllabus of errors in accordance with the Ex Cathedra pronouncements on 'No Salvation Outside the Catholic Church' along with the continuity to previous Ecumenical Council's on teaching the Faith according to the will of God,


Herein lies( LIES ) the problem. Explicit fact: We should pray and hope that God might have mercy on the souls of anyone that may have died in the state of Invincible Ignorance, had Baptism of Desire along with the non baptized aborted babies and infants. But leave these unknown mercies( to us on earth ) in the hands of God. We cannot see or project the mercies of God. We cannot see the dead. We do not partake in their judgement. We cannot assume or teach that which belongs to God alone.

What Cardinal Cushing did was transform the centuries of dogmatic teaching on " No Salvation Outside The Catholic Church " and transfer the ' Hope and Prayer ' in the unknown mercies of all that I have mentioned above and He stated and taught that these possible mercies are known to us on earth. The Cardinal usurped the possible eternal outcomes known to God alone and professed that these possibilities are done deals. To make matters much worse the Cardinal heavily influenced Church teaching and transfered his errors to include the heresy that non Catholics need not convert to the One true Catholic Faith. Most in the Church bought this travesty and thus we entered into the Crisis of Faith. The Cardinal tried to silence and did perdecute Father Feeney to the point of his trumped up ex communication. Church history will be kind to Father Feeney. For those that think that this is not the case, I urge you to pray as to why the Church has suffered so for over a half century. I will save the Church failings on Blessed Mothers requests at Fatima for another post.