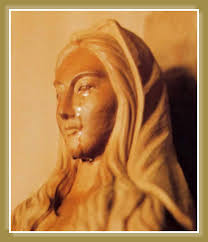 Our Lady in many of her messages ( apparitions and locutions) has said that less importance will be given to the Eucharist, it will be profaned and then phased out. Today's synod will be another important step in the phasing out of the Eucharist from the Catholic Church.

At Akita,Japan Our Lady said that many of the religious will accept compromise on the Eucharist.

Also they have been giving the Eucharist to persons who are pro-abortion, persons immodestly dressed, practising homosexuals and now to another category of Catholics living in mortal sin approved by the Synod on the Family.
The Synod  could be an important day in the Sacrilege of the Eucharist.
Pope Francis has approved the Eucharist being given to pro-abortion Catholic politicans. He has approved the Eucharist being given to those in same sex marriages.What next ?
More and more is Maria Divine Mercy proving correct in her statements.
Maria Divine Mercy has said that those who are faithful to the teachings of the Catholic Church will be excommunicated. Our Lady said about the same thing in her locutions to Fr.Stefano Gobbi of the Marian Movement of Priests.Recently a few priests of the Franciscans of the Immaculate were suspended a divinis.

Our Lady told Fr.Stafano Gobbi that ecclesiastical Masonry will enter the Church. She said that the devil will enter the highest levels of the Church and this was what she had already predicted at Fatima.

Our Lady told Fr.Stefano Gobbi, whose book had the Imprimatur,that one of her messages at Fatima was that the devil will enter the highest levels of the Church.
-Lionel Andrades
Posted by Catholic Mission at 1:47 PM