The Synod of the Family was a preparation for the great apostasy. It was another important milestone.

The Synod of the Family was a preparation for the great apostasy. It was another important milestone.The final abomination of desolation, the great apostasy, would be the worship of Satan in the Catholic Church. Meanwhile there will still be true worship in a minority Catholic Church,hidden and persecuted.This is what Our Lady told Fr.Stefano Gobbi and we can see thngs unfolding clearly before us today. 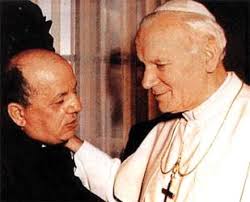 This was Our Lady's Message to Fr.Stefano Gobbi of the Marian Movement of Priests.The book approved by cardinals and bishops who encouraged cenacles of prayer was opposed by the Freemasons in the Catholic Church, whom Our Lady refers to in the book.
Maria Divine Mercy, who is living today , repeats many of the messages of Our Lady given to others including Fr. Stefano Gobbi, who died a few years back.

There will be a new cross and a new liturgy ,says Maria Divine Mercy, and most people in the Church will accept it .There will be no objection.It  will happen so fast.

Catholics at that time living in adultery will be given the Eucharist since this is what Pope Francis wants.Adultery will not be called a mortal sin.This has been recommended at the Synod on the Family.
There will be no mortal sin and no sacrilege in the New Church, with a new and false image of Jesus.They will tell us you can believe in Jesus but not sin and Hell.
In reality there will be disrespect for Jesus approved by the Freemasons within the Church.Take the U.S bishops (USCCB) for example.Recently they have announced that standing and receiving the Eucharist in the hand is the new norm.Kneeling at the consecration had already been stopped during the pontificate of Pope Benedict XVI.

On Oct 23 there will be a gathering of Protestants and Catholics at the St.John Lateran University, Rome where Pope Francis will be present,as  the last year.They will go on mission to other countries, without Catholic doctrine on salvation...This too began during the pontificate of Pope Benedict XVI who announced that Jews do not have to convert into the Catholic Church during the present times.
Pope Francis has approved the Eucharist being given to practising homosexuals and politicians who support same sex marriage in England.In the USA and elsewhere he has approved the Eucharist being given to pro- abortion politicans. Funds collected at Holy Mass (Church support) are being officially given to leftist causes.

Our Lady, at Akita,Garabandal and so many other places, has been telling us that Satan will target the Eucharist.He will finally want to end Holy Mass as we know it and will want to stop devotion to her, she told Fr.Stefano Gobbi.
She asks  to consecrate ourself to Her Immaculate Heart ,prayer the rosary and  form prayer groups( cenacles).This is a difficult  time through which we must pass.Finally there will be a a a purified Catholic Church which will
be poor but evangelical.
-Lionel Andrades
Posted by Catholic Mission at 10:56 AM