What about the Franciscan Friars of the Immaculate who were once considered 'crypto Lefebvrists' why is there no dialogue with them? : Francis-Fellay talks 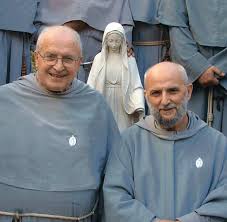 What about the Franciscan Friars of the Immaculate who were once considered 'crypto Lefebvrists' why is there no dialogue with them?
The Franciscan Friars want to offer the Traditional Latin Mass, only like the SSPX. They also want to affirm the old ecclesiology, just like the SSPX.
Why is there no dialogue with these priests who are not allowed to offer the TLM and their canonical status is irregular ?.
Like the SSPX and Pope Francis they interpret Vatican Council II with the theology of Cushingism instead of Feeneyism. Like the SSPX they reject Vatican Council II interpreted with Cushingism and are unaware of the Feeneyite alternative.

Meanwhile Pope Francis accepts Vatican Council II interpreted with irrational Cushingism, which makes the  Council a break with Tradition, and in particular the dogma extra ecclesiam nulla salus(EENS).No one has told him that there is a choice and that his irrational interpretation of the Council cannot be the work of the Holy Spirit.
The Franciscan Friars of the Immaculate and the SSPX say that they accept the dogma EENS like the 16 century missionaries, but in reality they reject the dogma theologically, by assuming that there is known salvation outside the Church.For them theologically, hypothetical cases are objective exceptions  to EENS.LG 16, UR 3, NA 2 etc refer to not  invisible but visible cases.They are following the objective error of the Letter of the Holy Office 1949. 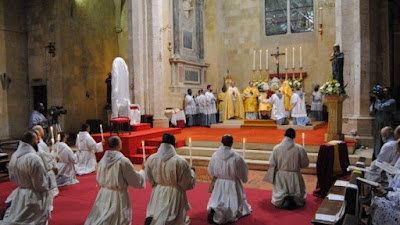 The two popes reject the dogma EENS and say there is a development of doctrine with Vatican Council II.This is first class heresy based upon on irrational inference. The interpretation of Vatican Council II is based on the Rahner-Ratzinger new theology, which assumes there are known people in Heaven or on earth saved without the baptism of water.
The two popes like the SSPX and  the Franciscans of the Immaculate accept the new theology of the Letter of the Holy Office 1949 which indicates there are known cases of the baptism of desire etc which are objective exceptions to the traditional Feeneyite interpretation of the dogma.It was Cardinal Richard Cushing who brought in an innovation but they criticize Fr.Leonard Feeney. 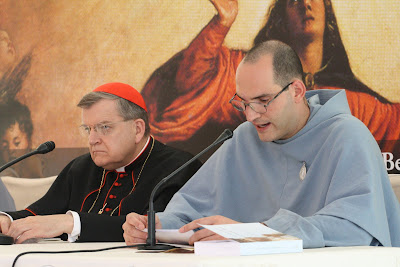 The error or mistaking hypothetical cases as being explicit was then placed in Vatican Council II (LG 14, LG 8 etc).There was an objective mistake made in the Letter of the Holy Office and based upon this mistake it was concluded in Vatican Council II( LG 14; LG 8), that there is known salvation outside the Church.
If the SSPX and the Franciscans of the Immmaculate interpret Vatican Council II without this irrational premise, the Council will be in harmony with the 16 century interpretation of EENS. This would be objectionable to the two popes and the political Left which controls Catholic theology. 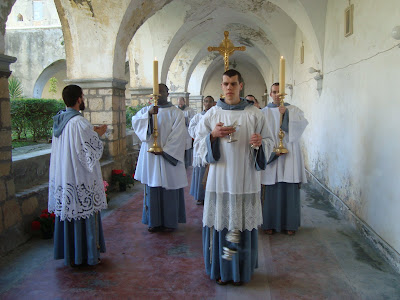 It would mean in Religion Class Catholic school children would affirm the strict interpretation of the dogma EENS in harmony with Vatican Council II ( Feeneyite version).

It would also mean in Ecclesiology classes at the pontifical universities in Rome there would be no known exceptions to the old ecclesiology, the centuries old ecclesiology based on EENS.It would be saying all Jews and Muslims need to formally enter the Church with no exception, to avoid Hell. LG 14 ( those who know) refers to a hypothetical case.Also there being salvation outside the Church refers to a hypothetical case. So LG 14 and LG 8 are not exceptions to the strict interpretation of EENS.
It would also mean all 'heretics and schismatics'(Council of Florence, Cantate Dominio,1441), all Christians, need to formally enter the Catholic Church with Catholic Faith( AG 7, LG 14) for salvation.
Simply by considering LG 16 as invisible and not visible (this is common sense) would cause a major change in the Catholic Church. It would be a return to the old ecclesiology, which is supported by the SSPX and the Franciscans of the Immaculate.This was the original ecclesiology associated with the Traditional Latin Mass and the Greek Byzantine Mass.
-Lionel Andrades Posted by Catholic Mission at 4:29 PM