Pope Francis: doctrine unites, ideology divides(Vatican Radio) True doctrine unites; ideology divides. That was the message of Pope Francis in the homily at the morning Mass at the Casa Santa Marta on Friday.
Lionel: In Poland the false doctrines of the popes has theologically created a separation of Church and State.Without the new theology of the two popes Vatican Council II affirms the strict interpretation of the dogma extra ecclesiam nulla salus(EENS).Upon EENS (Feeneyite) we have the non separation of Church and State.
Presently the Conference of Catholic Bishops in Poland are using the leftist ideology, based on Cushingism, to interpret all magisterial documents.So Vatican Council II becomes a rupture with the past ecclesiology of the Church based on exclusive salvation, upon which the teachings on the Social Reign of Christ the King had its foundation.
__________________________________________

The Pope based his reflections on the so-called Council of Jerusalem which, around the year 49 A.D., decided that gentile converts to Christianity would not have to be circumcised.
The Holy Father was commenting on the First Reading, from the Acts of the Apostles. He noted that even in the first Christian community “there were jealousies, power struggles, a certain deviousness that wanted to profit from and to buy power.” There are always problems, he said: “We are human, we are sinners” and there are difficulties, even in the Church. But being sinners leads to humility and to drawing close to the Lord, as Saviour who saves us from our sins. With regard to the gentiles who the Spirit called to become Christians, the Holy Father recalled that, in the reading, the apostles and the elders chose several people to go to Antioch together with Paul and Barnabas. The reading describes two different kinds of people: those who had “forceful discussions” but with “a good spirit,” on the one hand; and those who “sowed confusion”:

“The group of the apostles who want to discuss the problem, and the others who go and create problems. They divide, they divide the Church, they say that what the Apostles preached is not what Jesus said, that it is not the truth.”
Lionel: From Pope Pius XII to Pope Francis new salvation doctrines have been created in the Church. The Letter of the Holy Office 1949 issued by Cardinal Francesco Marchetti Selvaggiani made a mistake. The magisterium in Rome and Boston assumed  invisible cases of the baptism of desire were visible. So now the new ideology is based on this error. It interprets Vatican Council II with all hypothetical cases being defacto and concrete.Then it is infer that these 'visible invisble cases' are objective  exceptions to the past ecclesiology on which was based the non separation of Church and State.
____________________________________________

The apostles discussed the situation among themselves, and in the end came to an agreement:

“But it is not a political agreement; it is the inspiration of the Holy Spirit that leads them to say: no things, no necessities. Only those who say: don’t eat meat at the time, meat sacrificed to idols, because that was communion with the idols; abstain from blood, from animals that were strangled, and from illegitimate unions.”
The Pope pointed to the “liberty of the Spirit” that leads to agreement: so, he said, the gentiles were allowed to enter the Church without having to undergo circumcision. It was at the heart of the “first Council” of the Church: the Holy Spirit and they, the Pope with the Bishops, all together,” gathered together in order “to clarify the doctrine;” and later, through the centuries – as at Ephesus or at Vatican II
Lionel: At Ephesus they clarified doctrine but at Vatican Council II interpreted with Cushingism as a philosophy and theology they rejected past doctrine which was de fide in the Church.However today in Poland the Church can still interpret the dogma EENS with Feeneyism. All they have to do is recognise that the baptism of desire etc refer to invisible cases. Similarly they can interpret Vatican Council II with Feeneyism. All they have to do is recognise that LG 16, LG 8 etc refer to invisble cases. It is as simple is this. In this way they do away with the false ideology and new doctrines which the two popes support.__________________________________________

– because “it is a duty of the Church to clarify the doctrine,” so that “what Jesus said in the Gospels, what is the Spirit of the Gospels, would be understood well”:

“But there were always people who without any commission go out to disturb the Christian community with speeches that upset souls: ‘Eh, no, someone who says that is a heretic, you can’t say this, or that; this is the doctrine of the Church.’
Lionel: Presently false Cushingite doctrine is being maintained in the Church in Poland since the magisterium at the Vatican is heretical. They interpret Vatican Council II and the dogma EENS with a false premise.
__________________________________________

And this is the problem: when the doctrine of the Church, that which comes from the Gospel, that which the Holy Spirit inspires – because Jesus said, “He will teach us and remind you of all that I have taught’ – [when] that doctrine becomes an ideology. And this is the great error of those people.”
Lionel: The false doctrine and theology is now official in Poland and it is a reak with the magisterium of the past centuries.This is the new ideology which has to be identified and rejected in Poland. It is deception and based on a falsehood and so cannot be Catholic._____________________________________

The Church, he concluded, has “its proper Magisterium, the Magisterium of the Pope, of the Bishops, of the Councils,” and we must go along the path “that comes from the preaching of Jesus, and from the teaching and assistance of the Holy Spirit,” which is “always open, always free,” because “doctrine unites, the Councils unite the Christian community, while, on the other hand, “ideology divides.”
Lionel: Ideologues of new doctrine contradict St. Faustina Kowalska, St. Maximillian Kolbe and other Polish saints.-Lionel Andrades


Poland consecration to Christ the King : Collegiality in Vatican Council II is no more an issue when there is unity on correct doctrine

Polish bishops and President are also part of 'the false church': interpret the Catechism(1995) differently

Common mistake even the bishops and President of Poland need to address http://eucharistandmission.blogspot.it/2017/05/common-mistake-even-bishops-amd.html 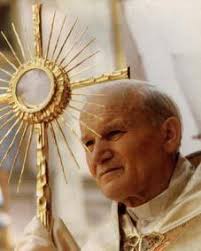 Bishop Schneider did not tell the Polish people that John Paul II made a theological mistake.Vatican Council II does not contradict the exclusivist ecclesiology of the past.
http://eucharistandmission.blogspot.it/2017/05/bishop-schneider-did-not-tell-polish_8.html


This is Pope Francis' political speciousness.Cushingism divides. Cushingism creates a new doctrine.New doctrines on salvation and morals is ideology


Cushingism is the name of the error that is professed by everyone that believes there are known exceptions to Extra Ecclesiam Nulla Salus-Cantarella on CathInfo.com forum

Posted by Catholic Mission at 4:27 PM