Repost : 'The dogma of the faith' is not lost: SSPX could trigger a schism and 'bring Rome back to the Faith'

'The dogma of the faith' is not lost: SSPX could trigger a schism and 'bring Rome back to the Faith'

'The dogma of the faith' has not been lost and the Society of St. Pius X  are at the point where they can trigger a schism among the liberal bishops conferences and religious communities but also bring Rome, the Vatican, back to the Catholic Faith with one stroke, one simple action, one small theological and philosophical correction.

Our Lady at Fatima said that the dogma of the faith will be lost except in Portugal, if she was referring to the dogma extra ecclesiam nulla salus, then it is presently lost among all sections of Catholics.
We have discovered however,thanks to her and Jesus, the specific cause of the loss of this dogma of the faith.We have found the missing link and we can correct the mistake.Whether the present liberal magisterium accepts the error and makes the change, is not known.However Catholics in general can come back to the Faith as it was known over the centuries.Whether they will be persecuted and isolated for this is another issue.However for the average Catholic, theologically and doctrinally we are once again in harmony.
The SSPX could restore 'the dogma of the faith' since they have a personal interest in doing so - their canonical recognition.They simply have to affirm Vatican Council II( Feeneyite) which is in harmony with 'the dogma of the faith'.This will cause a rebellion.The world will be furious. May be there will even be a schism before unity is restored.
However as Archbishop Lefebvre wanted, 'Rome will come back to the faith'. 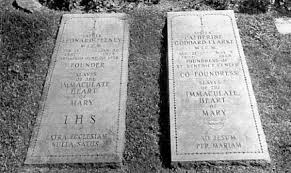 We must remember Leonard Feeney of Boston. He took on the entire Boston Establishment.They threw everything at him and he did not recant.

This is the big moment for the SSPX and the sedevacantists. They can affirm all magisterial documents with the theology of Feeneyism and bring Rome and the whole Church back to the Catholic Faith.-Lionel Andrades

Video Ave Verum - Slaves of the Immaculate Heart of Mary

Slaves of the Immaculate Heart of Mary

Posted by Catholic Mission at 8:13 PM

Labels: SSPX Rome must come back to the Faith