The Vatican is hiding the Leonard Feeney issue from the secular newspapers.The Church made a mistake an objective error.The Boston Heresy refers to the magisterium of that time.There never were exceptions to the centuries old interpretation of the dogma extra ecclesiam nulla salus(EENS). Since the baptism of desire(BOD), baptism of blood(BOB) and invincible ignorance(I.I) refer to invisible people.

Zero cases of something cannot be exceptions to the dogma EENS says the apologist John Martignoni.

Popes, cardinals and bishops since Pius XII have assumed invisible for us baptism of desire is a visible exception to the dogma EENS as it was known to St. Maximillian Kolbe, whose feast we celebrate today.
The secular newspapers are not aware of this.They do not know that the Church made a mistake in the Boston Heresy case and without this error, the interpretation of Vatican Council II completely changes.

The Vatican is not telling the media that the Letter of the Holy Office 1949 wrongly suggests that there are known cases of BOD, BOB and I.I which contradict EENS as it was propagated by Fr.Leonard Feeney.

If they did know about this the media could accuse the Vatican of deception and dishonesty.Even after being informed, the CDF/Ecclesia Dei, is hiding this  error and a possible new interpretation of the Council.It would be in harmony with the old ecclesiology of the Catholic Church, for example, as  in pre Kolbe times.

EXCOMMUNICATION OF FR.LEONARD FEENEY WAS AN INJUSTICE.
The magisterium wrongly excommunicated the priest from Boston.It was an injustice. He was not teaching any thing new.He refused to claim like the Archbishop, the Jesuits in Boston and the cardinals in Rome - that he could see and know physically visible cases of people saved outside the Church.The Jesuits expelled him and the Archbishop ostracized him and the St.Benedict Center, for not saying there was salvation outside the Church.

In a prepared statement for the press the former Jesuit(Fr.Leonard Feeney) added: "The conscience difficulty is that the diocese of Boston, under the auspices of Archbishop Cushing, and Boston College, under the auspices of Father John J. McEloney, S.J., both notably ignorant in the field of Catholic theology ... are teaching that there is salvation outside the Catholic Church." - Father Feeney Is Dismissed From Jesuit Order by Rome
http://www.thecrimson.com/article/1949/10/29/father-feeney-is-dismissed-from-jesuit/

LEFEBVRE WAS CORRECT ABOUT THE COUNCIL : EXCOMMUNICATION WRONG
Similarly the excommunication of Archbishop Marcel Lefebvre was wrong since without this mistake in the Fr. Leonard Feeney case Vatican Council II is not rupture with Tradition.No one informed the Archbishop.Even Pope John Paul II and Cardinal Ratzinger were interpreted  Vatican Council II with the irrationality.Archbishop Lefebvre was correct about the Council.

LUIZ LADARIA AND WALTER KASPER MADE A MISTAKE ON LG 16
Lumen Gentium 16 never was an exception to EENS.Wikipedia and so many others on the Internet have got it wrong.The Church also made a mistake on LG 16.Cardinal Luiz Ladaria S.J in the International Theological Commission, Vatican papers and Cardinal Walter Kasper in an online article for the Pontifical Council for Promoting Christian Unity have repeated this error. I have written about it on my blog. Similarly all the ecclesiology professors at pontifical universities in Rome repeat the magisterial mistake. Even the SSPX seminaries unknowingly use the new theology based on invisible cases of BOD, BOB and I.I being visible exceptions to all needing to be formal members of the Catholic Church to avoid Hell.The media meanwhile is clueless. 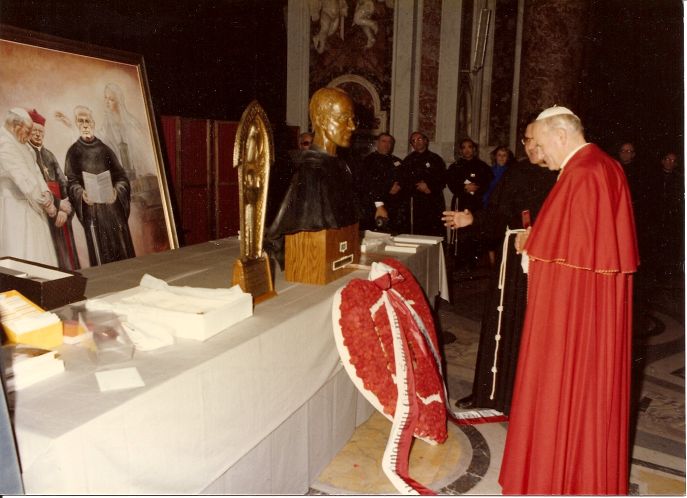 ROME WAS IN HERESY
The Church made a mistake in the Fr.Leonard Feeney case and it was Rome and the Archbishop in Boston who were really in heresy.They were rejecting Kolbe's exclusive salvation in the Church, by inferring that invisible people were visible exceptions.

The CDF/Ecclesia Dei are today forcing the Society of St.Pius X(SSPX) to accept Vatican Council II with this invisible- cases- are- visible reasoning which came into the Church at Boston.

The secular media does not know that the New Theology, which incorporates this error, can be avoided in the interpretation of the Council.Vatican Council II would then be rejected by the liberal bishops' conferences.The Left would call it 'fundamentalism' and 'political hate'.
However if the pope violates the Principle of Non Contradiction it still does not make the pope correct. We cannot see people on earth saved with BOD, BOB and I.I even if the pope suggests otherwise.This is a fact of life.
If the Magisterium violates the Principle of Non Contradiction the magisterium is still wrong. 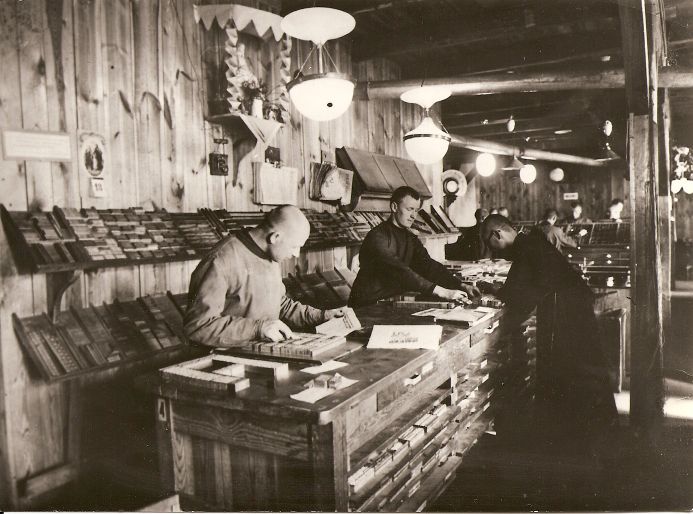 The magisterium does not release the secret.If Lumen Gentium 16 is considered invisible and unknown in particular cases Vatican Council II would not be a rupture with the dogma EENS and the Syllabus of Errors.This is something obvious.Since LG 8, LG 14, UR 3, NA 2, AG11, GS 22 would all be irrelevant to EENS.
BOD, BOB and I.I were irrelevant to EENS.This was known to St.Maximillian Kolbe in his radio programs and newspaper editions from the Cities of Mary, Cities of the Immaculate(Niepokalanòw).

SECRET AT CATHOLIC UNIVERSITIES AND SEMINARIES
This is kept a secret at Catholic universities and seminaries.There is an alternative interpretation which is rational and traditional  and has a continuity with the past but it is hushed up.Pre and post Vatican Council II ecclesiology would be the same but this is information kept hidden.

Msgr.Todd J. Lajiness, the Rector of the Sacred Heart Major Seminary, Detroit,  who is  a member of the Board of Commissioners for the Association of Theological Schools(ATS),USA  and also works with ATS on accreditation, visits seminaries throughout the USA.He ensures that this irrationality is taught in salvation theology. The traditional ecclesiology is rejected. It is not said by him that 'the Church made a mistake'.
The accreditation is only given to those instituitions which will not say that 'the Church made a mistake' in the Fr. Leonard Feeney case.
Accreditation is only given to those educational institutions which interpret Vatican Council II with Lumen Gentium 16 with the irrationality i.e it refers to visible and known people saved outside the Church.They have to choose Cushingism and reject Feeneyism to be recognised by the Catholic Church.
This is deception and dishonesty.

IRRATIONAL
How can people in Heaven, allegedly saved with the baptism of desire(BOD), baptism of blood(BOB) and invincible ignorance(I.I) be objective exceptions on earth to all needing to be formal members of the Catholic Church for salvation? 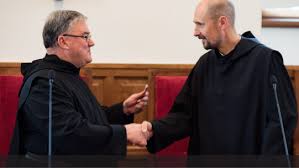 It may be mentioned that the new Rector of the Pontifical University of St.Anselm, Rome,Fr.Stefano Visintini osb, has said that there are no known cases of BOD, BOB and I.I and so they are not objective exceptions to the centuries old interpretation of the dogma EENS. They do not contradict EENS as it was known to St. Benedict.

Archbishop Thomas E.Gullickson has the same message and a few years back he called upon the Society of St. Pius X (SSPX) to accept Vatican Council II. He would be referring to Vatican Council II ( Feeneyite), the interpretation which does not mix up hypothetical cases as being objectively seen in the present times.So LG 16, LG 14, LG 8, UR 3, NA 2, GS 22, AG 7, AG 11 etc being theoretical and hypothetical would not contradict the dogma EENS and the old ecclesiology of the Church.There would be no break with the Syllabus of Errors.

SSPX CAN CAUSE A SCHISM BUT BRING ROME BACK TO THE FAITH AS LEFEBVRE WANTED
The Society of St. Pius X  are at the point where they can trigger a schism among the liberal bishops conferences and religious communities but also bring Rome, the Vatican, back to the Catholic Faith with one stroke, one simple action, one small theological and philosophical correction.They can affirm all magisterial documents with the theology of Feeneyism and bring Rome and the whole Church back to the Catholic Faith.This would be sensational for the media.
MYSTICI CORPORIS AND THE CATECHISM OF TRENT ARE FEENEYITE
Mystici Corporis, Quanta Cura, Catechism of Trent and Pius X do not state that BOD, BOB and I.I refer to visible, instead of invisible cases.Yet the SSPX seminarians assume they refer to visible cases of BOD, BOB and I.I. So they say that the Feeneyite interpretation of EENS cannot be accepted by them since (visible for them) BOD, BOB and I.I mentioned in Mystici Corporis, Catechism of the Council of Trent etc contradict Fr. Leonard Feeney of Boston.This is also the understanding in the media.

If the SSPX bishops and the seminary faculty did not interpret BOD,BOB and I.I and other hypothetical cases(LG 16,LG 8, UR 3, NA 2 etc) as referring to known people saved without the baptism of water; saved outside the Church, then Vatican Council II would not be a rupture with Tradition for the media.

Like the seminarians at Detroit, it is obligatory for the SSPX seminararians too, to state in public that BOD, BOB and I.I are exceptions to EENS and that the Holy Office 1949 did not make an objective mistake in the Fr.Leonard Feeney case.So there will not be any leaks to media from them.
When the mistake made by the Church is avoided it completely changes the interpretation of Vatican Council II and this is not taught at the SSPX or Detroit  seminary.The Vatican keeps quiet.-Lionel Andrades