They could have issued a declaration saying  the follows.
1. We affirm that invisible baptism of desire(BOD), baptism of blood(BOB) and being saved in invincible ignorance(I.I) are not visible exceptions to the Feeneyite interpretation of the dogma extra ecclesiam nulla salus(EENS).To suggest that they are is irrational.
2.We affirm that we cannot meet or see any one in 2018 saved with BOD, BOB and I.I.So they are not practical exceptions to the dogma EENS in the present times.Neither were they exceptions to EENS in the past.No one could see someone in Heaven saved with BOD,BOB and I.I and without the baptism of water in the Catholic Church.
3.So BOD, BOB and I.I are not , and never were exceptions to Feeneyite EENS. The Holy Office 1949 and the Archbishop of Boston, Cardinal Richard Cushing were wrong and Fr. Leonard Feeney was correct.The Magisterium was irrational.
4.So we can re-read Vatican Council II to understand that invisible and hypothetical cases of LG 8, LG 16, UR 3, NA 2, GS 22 etc are not explicit exceptions to the dogma EENS or the past exclusivist ecclesiology of the Church.
5.With there being no known salvation outside the Church there are no exceptions to the past understanding of exclusivist salvation in the Church. Vatican Council II is not a rupture with the past ecclesiology. So there can only be an ecumenism of return.
6.Since there is no known salvation outside the Church there can be no New Theology which was based on there being known salvation outside the Church.So all non Catholics and non Christians need to be members of the Catholic Church, with faith and baptism,to avoid Hell.
7.So there can only be an ecumenism of return, non Christians need to believe in Christ and become members of the Catholic Church for salvation.There would be traditional Mission knowing that all non Catholics who have died were oriented to Hell without faith and baptism (AG 7).Being incorporated into the Church with faith and baptism,  is the ordinary way of salvation.
This is the Declaration of this Conference(XYZ).We affirm the traditional teachings of the Catholic Church in harmony with the strict interpretation of the dogma extra ecclesiam nulla salus, Vatican Council II and the Catechisms (Trent, Pius X ,Pope John Paul II 1994 ).
This is a doctrinal issue and we appeal to the popes and the cardinals to also affirm it.' 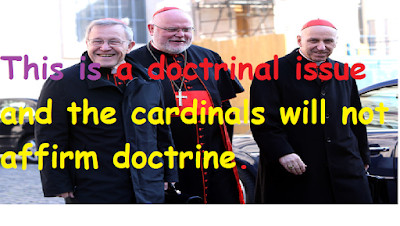 This is a doctrinal issue and the cardinals will not affirm it.They would no more be able to say that they affirm traditional doctrine.- Lionel Andrades 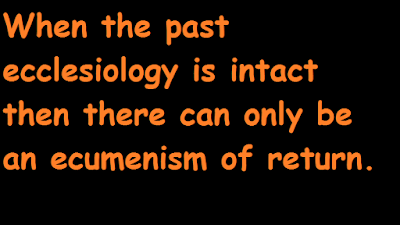 Is Vatican Council II a rupture with EENS? This is crucial. Since if there is no rupture with Feeneyite EENS then it means the old ecclesiology is intact

Labels: Conference “Catholic Church: Where are you heading?