A false Profession of Faith is being made by Catholic religious all over the world.

Under the Congregation for Institutes of Religious Life and Societies of Apostolic Life ,Vatican, when a religious says "I believe in the Holy Catholic Church" he or she means , a Church which is a break with the priest Fr.Leonard Feeney and the traditional interpretation of the dogma extra eccleisam nulla salus. So the understanding of Church(ecclesiology) has been changed. 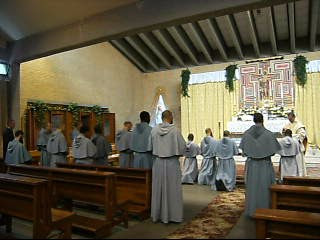 If you would ask a priest who has recited the Nicene Creed,  to name some one in 2013, who does not need to enter the Catholic Church with 'faith and baptism'(AG 7) it would draw a blank. There would be no answer.
So this is a false Profession of Faith based on an irrationality; on being able to see the dead who are exceptions to Tradition.

There is only one known baptism, which is visible and repeatable, the baptism of water. However in general the members of the Congregation for Institutes of Religious Life and Societies of Apostolic Life ,Vatican, assume there are three known bapisms, water, desire and blood. The baptisms of desire and blood are possibilities but not known exceptions which we can identify in 2013, as we could the baptism of water.
For many priests and nuns there are even more baptisms: seeds of the Word (AG 11) , imperfect communionwith the Church(UR 3) etc.

The new Governor General of the Franciscan Friars of the Immaculate Fr. P. Fidenzio Volpi O.F.M. Cap. will also make this false Profession of Faith. Since he will assume that there are known exceptions to Fr.Leonard Feeney's interpretation of the salvation dogma.He will reject an ecumenism of return and will expect  the Franciscan Friars and Sisters of the  Immaculate to do the same. Fr.Volpi would consider this 'being in step with the Church'.A Church in public heresy.He will have changed the meaning of the Creed.

Since knowingly or unknownly like other religious , he assumes can name non Catholics saved in 2013 who are not visible members of the Church,this must lead to a  'theology of religions'. In the interpretation of Vatican Council II and in inter religious  dialogue he will expect Fr.Stefano Manelli's community, to accept a 'theology of religions' which is being taught by priests and nuns at  Pontifical universities and seminaries. They would  do mission having to believe that other religions are equal paths to salvation.

The Congregation for Institutes of Religious Life and Societies of Apostolic Life ,Vatican members will not affirm the traditional intepretation of outside the Church there is no salvation according to Fr.Leonard Feeney.

This is the official teaching of the  Catholic Chruch, according to magisterial documents, interpreted without the Richard  Cushing Error. Instead, they will use the unofficial, popular interpretation of magisterial texts, using the  Cushing  premise of being able to see the dead-saved  who are exceptions to the interpretation of Fr.Leonard  Feeney.
Today, in general Catholic religious, Congregation for Institutes of Religious Life and Societies of Apostolic Life ,Vatican,  are making a Profesion of Faith, in which the meaning  has been changed of 'church'  and the 'Holy Spirit' with an irrartionality.
-Lionel Andrades


THE OFFICIAL TEACHING OF THE CATHOLIC CHURCH IS THIS
http://eucharistandmission.blogspot.it/2013/07/the-official-teaching-of-catholic.html#links


Known baptism of desire is the unofficial teaching in the Catholic Church
http://eucharistandmission.blogspot.it/2013/08/known-baptism-of-desire-is-unofficial.html#links

Posted by Catholic Mission at 11:09 AM