No denial from Cardinal Ladaria, CDF : schism from the Left over Vatican Council II 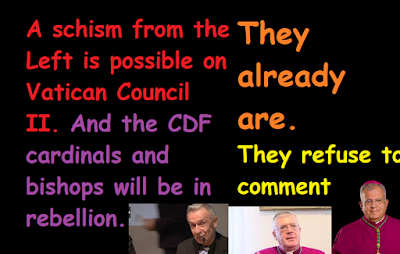 There is no denial from Cardinal Luiz Ladaria s.j,the  Congregation for the Doctrine of the Faith (CDF) or Ecclesia Dei.A schism from the Left is possible on Vatican Council II. And the CDF cardinals and bishops will be in rebellion.They already are.They refuse to issue a clarification or comment on this subject.
They have not responded to these blog posts over the last few years.A few thousand reports on the same subject can be read today on the Internet.
They were always supported by Pope Benedict, whom Pope Francis recently referred to as ' a master'.There is trouble ahead,however. 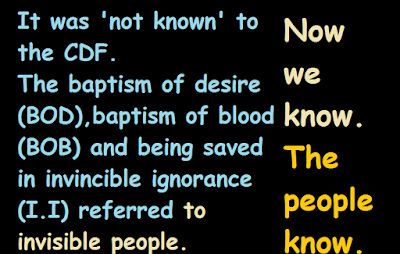 The traditionalists and sedevacantists will come out as strong supporters of Vatican Council II and the cardinals Marx,Muller, Ladaria and Wuerl will take up arms.
Cardinal Muller will not be able to play the old game and will not be able to say that doctrine has not changed while he supports the change pastorally.The issue here is doctrine.Pope Benedict calls it doctrine and says the SSPX must accept it for canonical status. In Redemptoris Missio, Cardinal Ratzinger indicated that 'the past ecclesiology' no more exists.But truth has a way of asserting itself independent of us mortals.He was wrong.In his Catechism(1994) he did away with the dogma extra ecclesiam nulla salus(EENS) and called it an 'aphorism'. 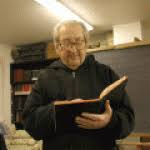 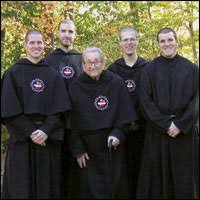 When he met Brother Francis MICM, the Superior of the St. Benedict Center, Richmond, N.H, he did not support Feeneyite EENS.Brother Francis was one of the professors who was supported by Fr. Leonard Feeney and was expelled by the liberal Rector of Boston College.
Cardinal Ratzinger maintained the error in the International Theological Commissions theological papers, Christianity and the World Religions and The Hope of Salvation for Infancts who die without being Baptised.This was continued in the Balamand Declaration and the Joint Declaration with the Lutherans on Justification.Pope Francis recently praised Pope Benedict and called hims the 'master'.

Cardinal Ratzinger employed only those people at the CDF, who for him were not in doctrinal heresy-Augustine di Noia, Guido Pozzo, Gerhard Muller, Luiz Ladaria.They all worked for the SSPX to affirm their version of Vatican Council II.

Now Cardinal Muller and archbishops Guido Pozzo and Augustine di Noia know that there can be two interpretations of Vatican Council II.The scenario has changed.

The interpretation of Vatican Council II is determned if the baptism of desire(LG 14) and other hypothetical cases, are considered physically visible or invisible, hypothetical or concrete in 2017.It was always as simple as this. But it was 'not known' to the CDF.
It was 'not known' to the CDF if the baptism of desire(BOD),baptism of blood(BOB) and being saved in invincible ignorance(I.I) referred to invisible people.Of course with invisible for us BOD,BOB and I.I Vatican Council II would not be opposed to the past ecclesiology.With the past ecclesiology there could be no new ecumenism and new reasons for mission. 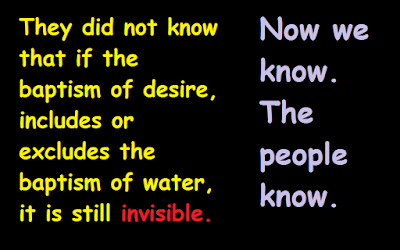 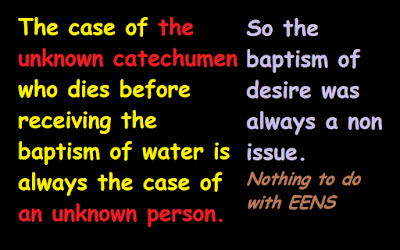 So the baptism of desire was always a non issue with reference to EENS.But the CDF did not know.
Now we know. The people know. The ordinary Catholic knows. 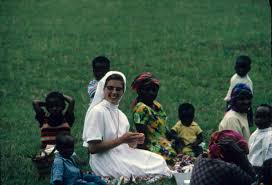 The baptism of desire refers to physically invisible people in 2017 and so there are no explicit exceptions to Feeneyite EENS.We are back to EENS according to the missionaries of the 16th century.It means 1) LG 16 does not contradict St. Francis Xavier, St.Ignatius of Loyola and St. Robert Bellarmine on EENS and 2) Vatican Council II( AG 7- all need faith and baptism for salvation) supports traditional mission and evangelisation as Cardinal Angelo Amato, former Secretary of the CDF said in an interview with Avvenire. 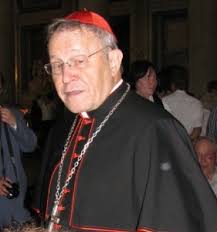 Is this the interpretation of Vatican Council II, though rational, which will be accepted by cardinals Ladaria, Muller, Marx, Cupich and Kasper?
Vatican Council II, without the Rahner-Ratzinger false premise is not a rupture with Tradition.The Holy Office 1949 was in heresy and Fr. Leonard Feeney, the expelled professors at Boston College and the St.Benedict Center were correct.
So what's going to happen  there does not seem a way out.A clash is expected.
Cardinal Muller supported Rocco Buttiglione in the introduction to his book.Then later in an interview with Riccardo Cascioli he said that doctrine has not been changed and he does not support the Eucharist being given to the divorced and remarried.This was still Catholic moral doctrine for him.But in the same interview he names conditions which are exceptions. 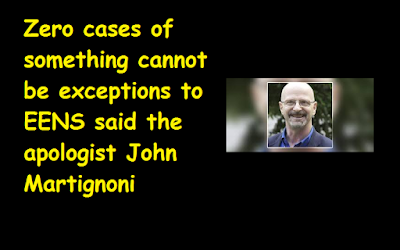 But what about Vatican Council II? Cardinal Muller cannot any more say LG 16, LG 14 etc are exceptions to  Feeneyite EENS.This would not be possible once there are cardinals saying LG 16 is not an exception to EENS.He cannot suggest that there are known cases of LG 14.This is what he indicated in an interview with Edward Pentin and got away with it.In future if he says there are exceptions to EENS he would infer that there are physically visible cases of the BOD, BOB and I.I saved outside the Church.This in general would be rejected by Catholics as being irrational.

Zero cases of something cannot be exceptions to EENS said the apologist John Martignoni who has a program on EWTN.
This is the same message of Fr. Stefano Visintin osb, the Rector  at the Pontificial University of St.Anselm, Rome.
So there could be a schism from the Left. The schism is already there for those who discern the two interpretations of Vatican Council II.
We are back to EENS according to the missionaries of the 16th century.Pope Benedict's last attempt to sustain his false and new theology, was in March 2016 with the Avvenire interview. 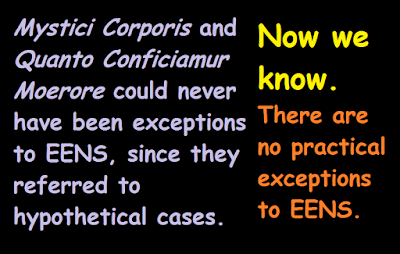 We now know that Vatican Council II is no more a development of EENS as Pope Benedict told us, perhaps forced by someone or some lobby and so he 'broke his silence'.Vatican Council II interpreted without the new theology is as traditional as the Jesuits in the Middle Ages.When the popes and saints over the centuries were referring to BOD, BOB and I.I it was to hypothetical cases only. So BOD, BOB and I.I never ever were exceptions to Feeneyite EENS as the liberal theologians tricked us into believing.Mystici Corporis and Quanto Conficiamur Moerore could never have been exceptions to EENS, since they referred to hypothetical cases.

When Massimo Faggioli on Twitter 1 rejects the 'medieval theology' and the Syllabus of Errors, it was only because he interpreted Vatican Council II with invisible for us baptism of desire(LG 14) being visible and known cases and hypothetical cases of LG 16 ( invincible ignorance) being non hypothetical and concrete. 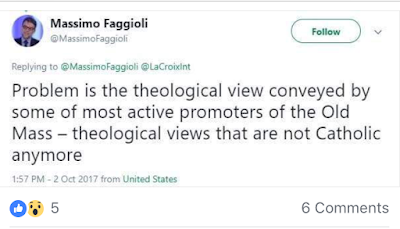 This deception was necessary for Faggioli to reject the 'medieval theology'.For him there were seen in the flesh cases of non Catholics saved outside the Church with 'the seeds of the Word'(AG 11) and 'elements of sanctification and truth'(LG 8) in other religions and Anonymous Christians known to him saved in 'imperfect communion'(UR 3) with the Catholic Church.
Even the traditionalists have got this wrong and so Faggioli could get away.
Archbishop Lefebvre was correct on Vatican Council II being a rupture with Tradition.But he was wrong to accept the Letter of the Holy Office 1949. He was wrong about Fr.Leonard Feeney.Invisible BOD, BOB and I.I could not be visible exceptions to EENS.
Pope John Paul II also knew there was something wrong with Vatican Council II and he expressed himself a few times.But he did not that the subtle premise was the cause of the rupture. 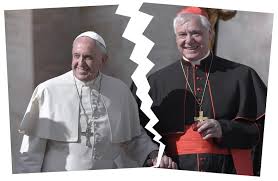 Now the CDF knows. Will Pope Francis make an announcement and correct the error?
For him is Vatican Council II in harmony with the past ecclesiology of the Church? It is, for me.
For me the two popes and the CDF Prefect are in heresy and in schism with the past magisterium of the Church.
For them LG 16 is a rupture with Tradition. In this way they could say all these years that they reject the past ecclesiology.
Now we know that there are no practical exceptions to EENS. There are no known cases of the baptism of desire. Hypothetical cases mentioned in Vatican Council II are not objective examples of salvation outside the Church for us human beings.So they cannot any more use the old excuse to reject Tradition in the name of Vatican Council II.
-Lionel Andrades

And Faggioli and the rest get away with it once again

Recent popes are a rupture with the past magisterium : Pope Francis needs to announce the correction

SSPX recognises that Abp.Lefebvre's writings are obsolete : seminaries have to make the correction

When there is no evidence of the existence of any excepton, then Vatican Council II does not contradict EENS, the Nicene Creed, the past ecclesiology and the Syllabus of Errors.It is in harmony with Tradition

It is always the case of an unknown catechumen who desired the baptism of water and died before receiving it. He is always invisible : there is no known case

So the baptisim of desire is not an example of salvation outside the Church, it is not relevant to extra ecclesiam nulla salus as an exception

Pope Francis has made a doctrinal mistake and is forcing it upon the St.Benedict Centers, SSPX and Franciscans of the Immaculate : he can correct it with an announcement

SSPX must not waste time.Affirm Vatican Council II (premise-free) : appeal to Card.Ladaria to do the same

The St.Benedict Center and Most Holy Family Monastery's position is that Church membership is objectively necessary for salvation : we three agree here 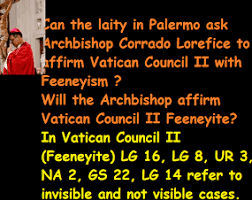 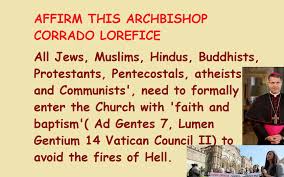 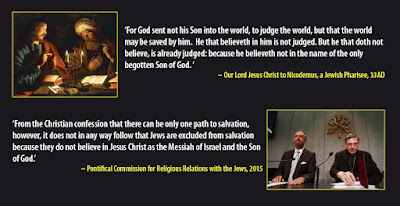 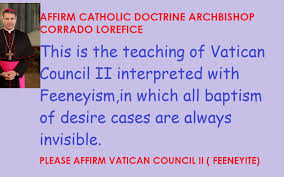 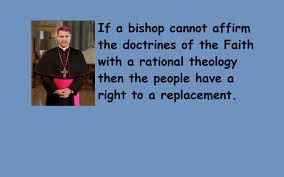 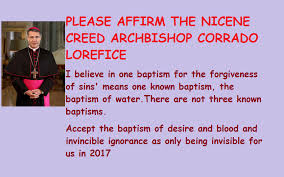 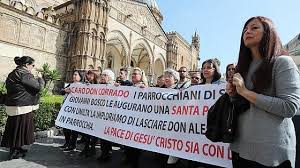 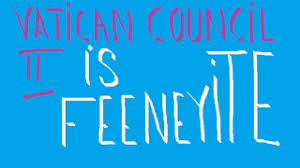 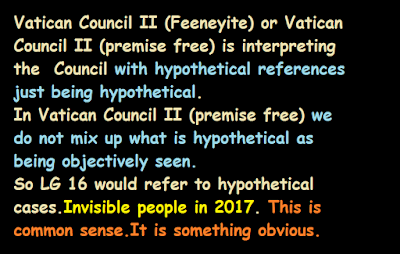 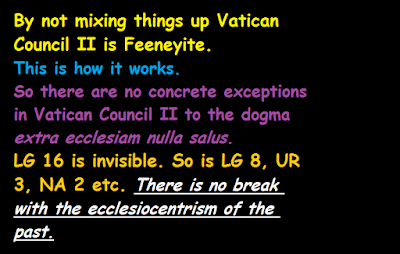 Posted by Catholic Mission at 3:22 PM