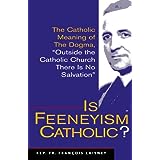 No one in the Society of St.Pius X (SSPX) knew of any one saved outside the Catholic Church this year  or the last  100 years and they are still selling the book Is Feeneyism Catholic? by Fr.Francois Laisney .Reports on the Internet state books by Archbishop Marcel Lefebvre are now obsolete and so also books on the Vatican Council II by Lefebrists Christopher Ferrara and Roberto dei Mattei.There is no denial.It has been also shown that Bishop Fellay made a theological and doctrinal error in one of his Letters to Friend and Benefactors and there is no acknowledgement  or clarification.They have nothing to say.


A few years back Bishop Charles Morerod O.P stated that the SSPX should not be allowed to use Catholic Churches until the doctrinal issue is settled.There  was no defense from the SSPX theologians in manifest ignorance.

The SSPX should by now know that Vatican Council II can be interpreted without the irrational premise and the conclusion is traditional.This is a discovery for the SSPX seminarians and priests today.

But they will continue to sell the book 'Is Feeneyism Catholic' by Fr.  Francois Laisney, a priest of the SSPX who was asked by Bishop Fellay to write against Bishop Richard Williamson and he obeyed.The conclusion of Laisney's book is opposite to that of the 2012 SSPX General Chapter Doctrinal Statement which the Vatican liberals at the CDF/Ecclesia Dei rejected.
The traditionalist website Rorate Caeili cannot discuss this issue since the editor, 'New Catholic' is being threathened by the Jewish Left. Even the liberal rabbi who teaches Catholic seminarians ecumenism at the Pontifical University of St.Thomas Acquinas( Angelicum) Rome, objects. He would like Rorate Caeili and the SSPX to continue to  interpret outside the Church there is no salvation, with the invisible people are visible premise ;unknown cases of the baptism of desire(BOD), baptism of blood(BOB) and being saved in invincible ignorance(I.I) are known exceptions  to the Feeneyite interpretation of extra ecclesiam nulla salus.This is important for the emerging new one world religion in a new one world order, which the two popes are supporting.
Fr.Jean Marie Glieze who teaches Ecclesiology at the SSPX seminary Econe, Switzerland, led the SSPX side in the doctrinal talks with the Vatican not knowing that the baptism of desire was never an exception to the dogma outside the Church there is no salvation.This was the ruse of the liberal theologians.Archbishop Lefebvre was in ignorance and accepted it.Since Pius XII did not correct the error.

So at the Vatican talks, doctrinally Fr. Jean Marie Gleize was on the Dominican Fr.Charles Morerod's side.Morerod led the Vatican team and was later rewarded. When he was made a bishop in Switzerldand he announced that the SSPX should not be allowed to use Catholic churches unless they settle the doctrinal issue. He meant that they had to accept Vatican Council II with LG 16 referring to known people saved outside the Church.
Bishop Fellay is still clueless.
Also the lay supporters of the SSPX, writers and speakers, are keeping quiet on this issue. They cannot announce that they were wrong all these years on Catholic doctrine.
Possibily next month Rorate Caeili will post a report criticizing Vatican Council II but will not state that the Council is in harmony with Feeneyite EENS.Expect the same from Remnant News, Angelus Press etc. Bishop Fellay should resign.Can't they find a replacement for him?

I sometimes have attended the SSPX Mass in a small chapel near the via Cavour Metro Station, Rome. The chapel is always full. I stand outside or kneel near the door. Near by there are so many churches which the SSPX priests in Italy cannot use since Bishop Fellay does not understand that Vatican Council II ( without the premise) is not a rupture with Feeneyite EENS.He has also made a doctrinal error in one of his public letters to SSPX benefactors not knowing of Vatican Council II and extra ecclesiam nulla salus, interpreted without the false invisible people are visible premise.
I wish he would quit if he cannot do anything about this problem.It is now a  few years.Inspite of some many prayers ' it does not sink in' or he is afraid to say that Archbishop Lefebvre made a mistake and his writings are now obsolete.The SSPX bishops too were clueless during the excommunication.
The doctrinally in correct and theologically flawed SSPX book by Laisney is now being sold by Amazon.Other sellers include Angelus Press and possibly leftist media.It is a book for liberals and traditionalists.-Lionel Andrades

(No denial to the following report.The SSPX knows that LG 16 etc cannot be an exception to Feeneyite EENS)


Books of Archbishop Lefebvre are obsolete now : so are the writings on Vatican Council II by Chris Ferrara and Roberto dei Mattei

http://eucharistandmission.blogspot.it/2017/11/books-of-archbishop-lefebvre-are.html
Posted by Catholic Mission at 10:36 AM

Labels: Fr.Francois Laisney, Is Feeneyism Catholic?, No Denial From SSPX, No denial from the SSPX, SSPX, SSPX Admits Mistake