Archbishop Guido Pozzo rejects the Syllabus of Errors with Vatican Council II and EENS interpreted with the false premise : SSPX must note the doctrinal error 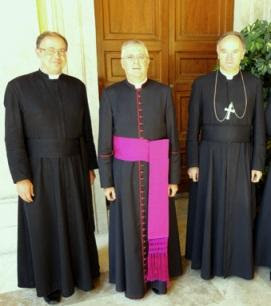 New Theology: : (with the premise) It refers to the new theology in the Catholic Church based on hypothetical cases being objective in the present times.So it eliminates the dogma EENS.With the dogma EENS made obsolete the ecclesiology of the Church changes. There is a new ecclesiology which is a break with Tradition.It is of course based on the false premise.
Extra Ecclesiam Nulla Salus ( with the false premise).It refers to the dogma but with exceptions.All do not need to defacto convert into the Church in the present times, since there are exceptions.The baptism of desire( with the premise), baptism of blood( with the premise) and being saved in invincible ignorance( with the premise) are exceptions to dogma as it was known to the missionaries in the 16th century.
Extra Ecclesiam Nulla Salus ( premise-free): It refers to the dogma as it was interpreted over the centuries.There are no known exceptions to all needing to formally enter the Church, with faith and baptism, to avoid Hell.Invisible for us baptism of desire, baptism of blood and being saved in invincible ignorance are not visible exceptions to all needing to be incorporated into the Catholic Church for salvation.
Catechism of the Catholic Church ( with the premise): CCC 1257 contradicts the Principle of Non Contraduction. Also CCC 848 is based on the new theology and so is a rupture with the dogma EENS( premise-free). So this is an interpretation of the Catechism with the false premise.
Catechism of the Catholic Church ( premise-free): CCC 1257 does not contradict the Principle of Non Contradiction since there are no known exceptions to all needing the baptism of water for salvation. There are no known cases in the present times of God not being not limited to the Sacraments(CCC1257).
When CCC 846 states all who are saved are saved through Jesus and the Church,CCC 846 does not contradict the dogmatic teaching on all needing to formally enter the Church.It is a reference to a hypothetical case and not somebody known. CCC 846 does not contradict Ad Gentes 7 which states all need faith and baptism for salvation.
________________________
Massimo Faggioli like Cardinal Raymond Burke does not affirm the dogma extra ecclesiam nulla salus(EENS).

“There is but one universal Church of the faithful, outside which no one at all is saved.” (Pope Innocent III, Fourth Lateran Council, 1215.)
“We declare, say, define, and pronounce that it is absolutely necessary for the salvation of every human creature to be subject to the Roman Pontiff.” (Pope Boniface VIII, the Bull Unam Sanctam, 1302.)
“The most Holy Roman Church firmly believes, professes and preaches that none of those existing outside the Catholic Church, not only pagans, but also Jews and heretics and schismatics, can have a share in life eternal; but that they will go into the eternal fire which was prepared for the devil and his angels, unless before death they are joined with Her; and that so important is the unity of this ecclesiastical body that only those remaining within this unity can profit by the sacraments of the Church unto salvation, and they alone can receive an eternal recompense for their fasts, their almsgivings, their other works of Christian piety and the duties of a Christian soldier. No one, let his almsgiving be as great as it may, no one, even if he pour out his blood for the Name of Christ, can be saved, unless he remain within the bosom and the unity of the Catholic Church.” (Pope Eugene IV, the Bull Cantate Domino, 1441.)
For Archbishop Pozzo hypothetical references in the Catechism of the Catholic Church and Vatican Council II and the Letter of the Holy Office 1949 are non hypothetical and are examples of objective cases, known people saved outside the Church.So these documents become a rupture with Tradition when they really are not.

EXAMPLES OF THE HYPOTHETICAL REFERENCES IN THE CATECHISM FOR HIM WHICH ARE NOT HYPOTHETICAL.
1. 'God is not limited to the Sacraments'(CCC 1257)
'2.all salvation comes from Christ the Head through the Church which is his Body'(CC(CCC 846).
3. Those 'justified by faith in Baptism are incorporated into Christ; they therefore have a right to be called Christians'(CCC 818).
4. They are 'joined in many ways to the baptized who are honored by the name of Christian, but do not profess the Catholic faith in its entirety or have not preserved unity or communion under the successor of Peter."(CCC 838).
5. 'the plan of salvation also includes those who acknowledge the Creator, in the first place amongst whom are the Muslims'(CCC 841).

EXAMPLES OF HYPOTHETICAL REFERENCES IN VATICAN COUNCIL II FOR HIM WHICH ARE NOT HYPOTHETICAL.
1. 'elements of sanctification and truth'in other religions(LG 8),
2..'good and holy' things in other religions(NA 2),
3..'a ray of that Truth which enlightens' all men(NA 2),
4.'imperfect communion with the Church(UR 3),
5.' people of good will in other religions'(GS 22),
6.' seeds of the Word'(AG 11),
7.'invincible ignorance'(LG 16),
8.'a good conscience'(LG 16) etc.

HYPOTHETICAL REFERENCES IN THE LETTER OF THE HOLY OFFICE 1949 TO THE ARCHBISHOP OF BOSTON WHICH FOR HIM ARE NOT HYPOTHETICAL.

1.Therefore, no one will be saved who, knowing the Church to have been divinely established by Christ, nevertheless refuses to submit to the Church or withholds obedience from the Roman Pontiff, the Vicar of Christ on earth.(we do not know who this person is in particular so it is a hypothetical case.)

2.In His infinite mercy God has willed that the effects, necessary for one to be saved, of those helps to salvation which are directed toward man's final end, not by intrinsic necessity, but only by divine institution, can also be obtained in certain circumstances when those helps are used only in desire and longing.(we do not know any one in particular as such so this is a hypothetical case.)

3.Therefore, that one may obtain eternal salvation, it is not always required that he be incorporated into the Church actually as a member, but it is necessary that at least he be united to her by desire and longing.( if there is any such person he or she would only be known to God. So this passage is irrelevant to the dogma EENS. It cannot be an exception.Since it is a reference to an invisible person for us.)

4.However, this desire need not always be explicit, as it is in catechumens; but when a person is involved in invincible ignorance God accepts also an implicit desire, so called because it is included in that good disposition of soul whereby a person wishes his will to be conformed to the will of God.(it is a reference to an unknown catechumen)

Posted by Catholic Mission at 8:36 PM