I am the only Catholic pointing out this general schism, which is a like a doctrinal epidemic in the Church.I do not use the false premise and so am schism-free.


Are you saying everybody is in schism except for yourself?
I am saying everybody is interpreting Vatican Council II as a rupture with 'the strict interpretation' of the dogma extra ecclesiam nulla salus(EENS) and the Syllabus of Errors.This includes the popes, cardinals and bishops and also the traditionalists.Both liberals and conservatives use an irrational premise, of which they are not aware of,to interpret the Council II.The result is a rupture with the popes over the centuries.The conservatives criticize the Council and the liberals welcome it.Both accept the mistake in the Letter of the Holy Office 1949 unknowingly.They repeat that error in the interpretation of Vatican Council II.
So they are in a rupture with the past popes and Church Councils.This is schism.

POPE BENEDICT CONFIRMS SCHISM
Pope Benedict confirmed this schism in March 2016 when he said in public that EENS for him, was  no more like it was for the missionaries in the 16th century. There was 'a development' with Vatican Council II for him.He questioned the need for Mission since for him there was known salvation outside the Church and this was mentioned in Vatican Council II for him.

CARDINAL LADARIA CONFIRMS SCHISM
Then on March 1,2018, two years after the popes schismatic statement, Cardinal Luiz Ladaria at the Press Conference on Placuito Dei confirmed that the Catholic Church no more claims superiority and exclusiveness in salvation, as in the past.He cited Lumen Gentium 8  as an exception  to EENS.Since for him it refers not to a hypothetical case but known people saved outside the Church in the present times.This was his take on LG 8 and definitely not mine.

OFFICIAL SCHISM ON DOCTRINE MADE PUBLIC BY THEM
This is public schism with the popes and Church Councils of the past. Pope Benedict and Cardinal Ladaria could have interpreted Vatican Council II as I do. Then there would not be a rupture with Tradition.They chose not to do so even though there are so many reports on line explaining this error which can be avoided. 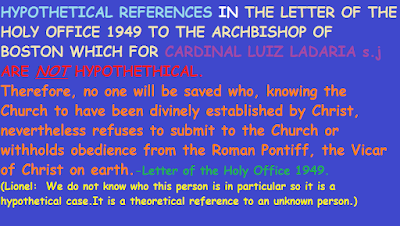 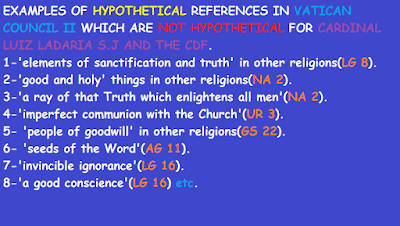 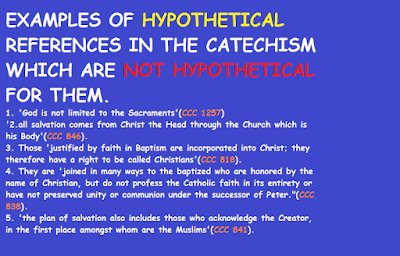 DOCTRINALLY I AVOID THE FALSE PREMISE
I affirm Vatican Council II and EENS with Feeneyite theology i.e with hypothetical cases being non hypothetical and without there being practical exceptions to EENS in 2018 or in the past.Invisible cases of the baptism of desire etc cannot be practical exceptions to EENS.This is common sense.
I affirm the first part of the Letter of the Holy Office 1949 which supports EENS according to the Magisterium of the 16th century and I reject the second part of the Letter which contradicts the first part and Tradition.It mixes up what is invisible as being visible.This is an error which is obvious.

FR.LEONARD FEENEY WAS SET UP FOR HIS ORTHODOXY
The Magisterium in schism and heresy used the false premise to interpret EENS and then excommunicated Fr. Leonard Feeney for his orthodoxy on this subject.

THEY EXCOMMUNICATED ABP.LEFEBVRE FOR SPEAKING THE TRUTH
They also used the false premise to interpret Vatican Council II as a rupture with the past and then excommunicated Archbishop Marcel Lefebvre and the SSPX bishops for rejecting this version of the  Council.
Now when the SSPX does not accept Vatican Council II interpreted with the false premise, some say that the SSPX is in schism.

CATHOLICS GENERALLY IN SCHISM CANNOT EXPECT THE POPES TO CORRECT THE ERROR
So in general Catholics today are doctrinally and theologically in schism and this is approved by a Magisterium gone sour.Catholics cannot expect the popes to speak the truth and correct the error.
It is really the present Magisterium which is in schism and the doctrinal proof is there on line.The present Magisterium has to align itself with the past popes on EENS and re-interpret Vatican Council II in line with Tradition.It is their false theology, based on a philosophical error,which creates the rupture. They violate the Principle of Non Contradiction by telling us there are known people saved, who are now in Heaven without the baptism of water, and are supposedly  exceptions on earth to the traditional interpretation of the dogma EENS. People in Heaven are visible on earth!
This is what I call Cushingite Theology( New Theology) as opposed to traditional Feeneyite theology.Cushingism causes the hermeneutic of rupture  with the past.
I am the only Catholic pointing out this general schism, which is a like a doctrinal epidemic in the Church.I do not use the false premise and so am schism-free.
-Lionel Andrades 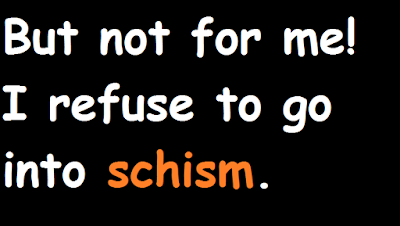 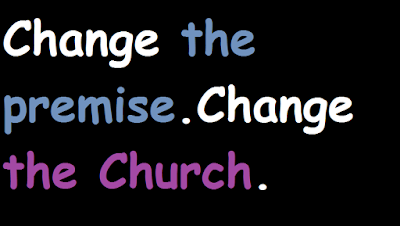 Cardinal Luiz Ladaria, Archbishops Guido Pozzo and Augustine di Noia are schismatic but I am not since I affirm all magisterial documents but interpret them with Feeneyism.So there is no rupture with the past popes.

Schismatic Cardinal Luiz Ladaria's rejection of exclusive salvation in the Catholic Church last Thursday comes from the Letter of the Holy Office 1949 : dark footprints also there in Christianity and the World Religions and The Hope of Salvation for Infants Who Die Without Being Baptised,ITC

Posted by Catholic Mission at 10:02 AM